I am a cheese addict – one could say it is like crack for me. The mere suggestion of doing a cheese and mezcal pairing, well it sent shivers down my spine. It doesn’t seem like an obvious pairing, but when you think about how well whiskey or scotch pairs with cheese, this is really just a natural extension.

We had a chance to crash a casual exploration of this combination last night at Mosto. Raza Zaidi of Wahaka Mezcal provided the mezcal and Kirstin Jackson of Solano Cellars and the blog www.itsnotyouitsbrie.com (she also has a book It’s Not You, It’s Brie: Unwrapping America’s Unique Culture of Cheese,” publishing in November) brought the cheese. We set up shop at the dark, back corner booth, drawing the immediate attention of the very loud (and yes, drunk) birthday party sitting next to us.

Nine cheeses and five mezcals, and a few Victorias were spread across the table.

The mezcals: Wahaka’s Joven Espadin, Reposado con Gusano, Tobala, Madrecuishe and the Ensemble (Espadin, Tobala and Madrecuishe blend). Note – we’ll have a full review of the line next week.

We first went through the mezcals to get a sense of their flavors, and then Kirstin went to work to try and pair up the different cheeses with the different mezcals. It was an interesting and tricky work determining which of the tangy, pungent, musky, sweet cheeses contrasted best with the mineral, earthy, hot, smokey flavors of the mezcals.

Not surprisingly, the cheddar and the pecorino paired well with all of the mezcals.  We assumed that the salty pecorino would pair well given the known flavor match of salty and spicy flavors with mezcal but the the big aged cheddar’s performance was a nice surprise.  The strong body brought out the brine and mineral flavors in the mezcal.   I liked the Creamean with the Madrecuishe because there’s something about the tangy triple cream that contrasts with the minerally/green flavor of the mezcal. The Tomme with the Joven totally brought out the heat in the mezcal, and the queso fresco with the ate brought out an amazing caramel flavor in the Resposado.

The tasting sparked quite a few dreams of other pairings.  One conversation decided that Parmeggiano just wouldn’t stand up to mezcal while another affirmed that Manchego and Gruyere would probably pair exceedingly well.  Which is to say that we look forward to expanding the range of the tasting soon.

← Previous Post
SF Cocktail Week – Jumpstarting with mezcal
Next Post →
It's not a weed, it's an agave 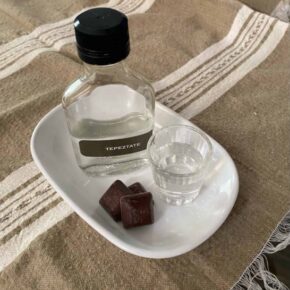