After a two year pandemic hiatus, the Agave Heritage Festival welcomed guests to Tucson for great programming and plenty of delicious agave spirits last week. Marking the 14th iteration of the event, which used to span two weeks, this year the schedule featured a series of discussions, art exhibitions, music, films, tastings, and more, presented over the course of one long weekend.

With explorations of pertinent issues led by industry experts to art and film that illuminate the beauty of agave spirits, this year’s programming served people with all levels of familiarity with the category. And with events set at a comfortable pace, like a slow meander through the desert, attendees were given ample space to connect with old and new friends and soak up the celebration offered in between sessions.

At the lectures, discussions, and tasting panels, several themes persisted through the conversations, but none so prominently as that of environmental sustainability. Almost every panel acknowledged that producers are seeing climate change impact the growing season, including at the Women in Mezcal event when ecologist Diana Pinzón from Zinacantán Mezcal in Puebla explained how yields this past January were noticeably lower than usual. She pleaded with brand owners and folks interested in starting new labels to not push for increased production because of the strain it puts on the environment. “People in the Mixteca and Oaxaca are the ones migrating the most, because natural resources are disappearing,” she said.

At a panel on conservation at Mission Garden, we heard something similar from the Colectivo Sonora Silvestre, an organization of biologists working to help reforest agaves in Bacanora-making municipalities. Because the Consejo de Regulador of Bacanora does not mandate environmental sustainability initiatives, this small but mighty group of twenty-somethings is working closely with the Borderlands Restoration Network and Bat Conservation International to drive changes in policy and encourage and educate producers to amp up their planting programs to ensure a steady supply of agave for the future of the Bacanora category. “I am only 26 years old, and we are changing the laws,” said Valeria Cañedo. “Think about what would happen if more people got involved.”

The preservation of tradition and culture was the second running theme of the discussions. Pedro Jimenez of Mezonte and Pare de Sufrir offered a suggestion for people who want to ensure that the social connective tissue of agave spirits continues to be preserved as the industry grows. “Sustainability is a word you can repeat without understanding it, and a lot of people want to ‘help’ communities [in Mexico]. But to do that we need to hear what their needs are,” he said. “If we are humble enough to hear and understand — not just going to a palenque once and think you know what you are talking about — that is a good baby step. Live there for six months and see how agave spirits are not the only thing that comes from the agave plant.”

At El Crisol, during a tasting and lecture on the nuances of fermented beverages, speaker and scientist Valeria Souza shared a moving personal mantra with the crowd. “I believe we are here on this earth to do two things: honor and nurture the earth, and build communities,” she said. Those two themes wove through the weekend as folks expressed their respect and admiration for the agave plant and connected with other enthusiasts. This was the first time I’ve been able to make it to the event, but it immediately became clear how founders Doug Smith and ​​Todd Hanley have used this festival to cultivate a community — a cross-border cadre of producers, importers, brand owners, scientists, writers, intellectuals, and enthusiasts. In creating a broad and diverse group of speakers, they have created a space for connection, education, critical thinking, and civil discourse.

This is no small thing! For the last two years industry conversations have existed almost entirely online thanks to COVID-19. Digital platforms only have so much to offer in the way of navigating nuanced conversations, and the world of agave spirits is so complex, those discussions can sometimes be impossible to have in a respectful way in the ether of the internet. Talking to one another face-to-face about complex issues like denominations of origin, cultural appropriation, and the future of agave spirits helps deepen understanding, expand awareness, and build bridges across differing backgrounds and experiences.

The ability to meet new people, shake hands with those we’ve only engaged with online, and give big grinning bear hugs to those we haven’t seen in years — all of us united in our interest and love for the incredible beverages of Mexico — is why the return of the Agave Heritage Festival felt so poignant this year. As Ricardo Pico mentioned in the closing tasting of Dasylirion spirits from around Mexico, “we’re all humans first,” and that is why we’re looking forward to returning again in 2023. 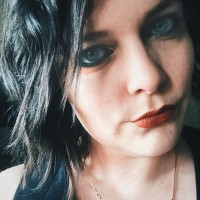 Emma Janzen is a journalist, photographer, and book author with a thirst for drinks that communicate a distinct sense of place. Her first book, Mezcal: The History, Craft & Cocktails of the World’s Ultimate Artisanal Spirit, was nominated for a James Beard award in 2018, and she has since penned stories about Mexican spirits of all kinds for PUNCH, Imbibe, and Eater. Writing and editing from her home base near Chicago, she prefers her mezcal neat, her martinis made with gin, and her champagne served in a coupe.

Adobe bricks to save us all?

Mexico in a Bottle – Denver

Emma Janzen is a journalist, photographer, and book author with a thirst for drinks that communicate a distinct sense of place. Her first book, Mezcal: The History, Craft & Cocktails of the World’s Ultimate Artisanal Spirit, was nominated for a James Beard award in 2018, and she has since penned stories about Mexican spirits of all kinds for PUNCH, Imbibe, and Eater. Writing and editing from her home base near Chicago, she prefers her mezcal neat, her martinis made with gin, and her champagne served in a coupe.

Join us May 15th at The Hangar at the Stanley Market