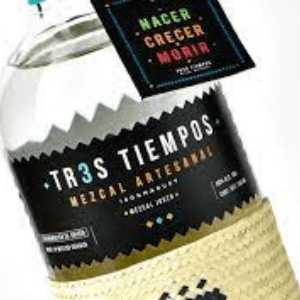 Tres Tiempos is a family and producer brand created by Raul Garcia. The mezcals are from Miahuatlan, Mexico.

Raul Garcia grew up with his grandparents in San Luis Amatlan. His mother moved to Mexico City in order to find work and send money back home. While not an uncommon story, there is no doubt the pace of exodus from rural communities in Mexico accelerated from the 80’s onward. Much as been written about this already (see this, and this to start) but there’s a bigger study to be made of the great Oaxacan diaspora as villages emptied of young men and women who had to leave their families in search of work, most often in the United States.

When he was young, Raul began working by his grandfather’s side, learning how to make mezcal with recipes passed down from generations before. Perhaps the greatest lesson was that making mezcal was no way to make a living and that, like so many others in his town, he would have to leave to find a future. He eventually found himself in the US, dreaming big and maintaining the resolve to make it, even when homesickness, and the deaths of his grandparents, brought him close to giving it all up.

The passing of his grandparents brought back all of the memories of making mezcal – the little shack that held all of the tools – but especially the day his grandfather handed him those tools and told him that it was time to make his own mezcal. It was these memories and more that Raul carried with him. And when he found himself in San Francisco having dinner with a friend almost six years ago, he was surprised to see mezcal at the bar, and perhaps even more surprised by its price point. It didn’t taste like what he had grown up with and he immediately said to his friend, if I could sell the mezcal that my town makes…

A little over five years ago, Tres Tiempos was born. The name represents how things in the mezcal world come in threes; from celebrations (like baptisms, marriages, and deaths) production (the roast, fermentation, and distillation), and who touches it (the agavero, the Mezcalero, and the bottler). When Raul thinks about mezcal now, it represents keeping a community together and giving people good work so families don’t have to separate in order to make a living. And, perhaps most importantly, is the personal connection: Even though his grandfather is no longer physically here, his spirit is represented in every bottle.

Tres Tiempos is a family and producer brand created by Raul Garcia. The mezcals are from Miahuatlan, Mexico.