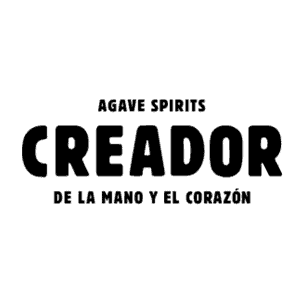 Creador Agave Spirits was founded by Marcus Piña. It is made by mezcalero José Alberto Pablo in San Bernardo Mixtepec, Oaxaca.

Marcus is a designer who slid into the mezcal world after trying it in Austin’s La Condesa. Like many before him, the mezcal bug led to tastings and trips to Oaxaca and then the idea for a brand.  José Alberto is a third generation palenquero whose father, Don Mario, still works with him at the palenque. His mezcal inheritance is matrilineal, his maternal grandfather was the one with the distilling knowledge which was passed to his mother. She knows how to do it all and continues to help out at the palenque.

Local distilling traditions feature distinctive clay pot fermentation and steel condensers which make their mezcals yellow. José Alberto says that traditionally “in San Bernardo Mixtepec they only drink  yellow mezcal. It was always yellow. They think that white mezcal is fake.” But, he makes white mezcal for export and for the tourists who visit his palenque. He says that the idea originally came to him when he was living in the US and saw all the white mezcal.

That’s not the only thing José Alberto got from the US. He learned to distill while young when his father rented a palenque for their distillations. José Alberto “always had the idea of making a palenque near the house.” So, he followed the path that so many Mexicans have followed for generations. He went north to work in the US in order to earn enough to build his palenque.

Creador Agave Spirits was founded by Marcus Piña. It is made by mezcalero José Alberto Pablo in San Bernardo Mixtepec, Oaxaca.