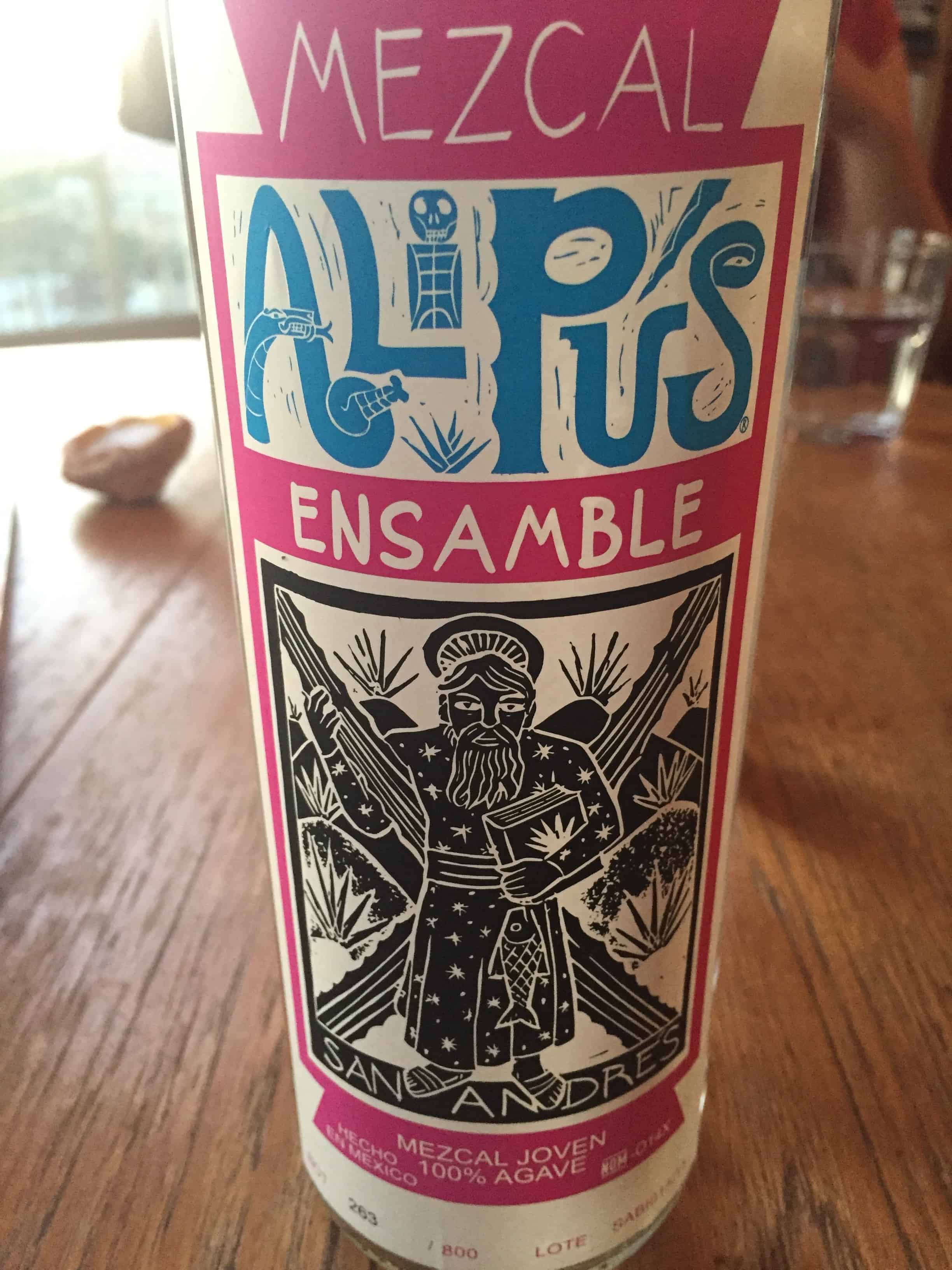 Back to the future with ensembles

We’ve been through a few different eras of mezcal now in the United States (and I’m saying the US because as we all know, there are ample histories of mezcal in Mexico that are very different) and many appear to reflect what’s going on in the larger drinking culture. Ron Cooper’s innovation in calling Del Maguey mezcals “single village” gave drinkers a place name to latch onto similar to the villages that give some wines their names like Gigondas or Barolo. The single agave mezcals that swept the market in the early part of this decade were fellow travelers on the path of the single varietal wines like Chardonnay or Merlot. And now we’re seeing quite a few ensembles. 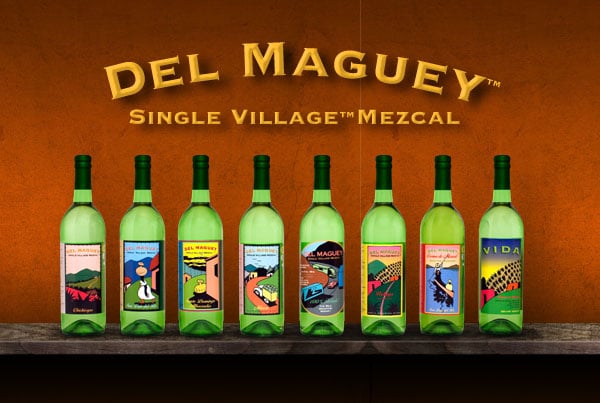 The Del Maguey line up.

Just in the past few months Montelobos launched theirs, Cuish has come to market with theirs, Mezcal Nacional with theirs, and it suddenly feels like there are many brands that, even if they’re not marketing the bottles as such, are putting out labels that are no longer single varietals. It’s funny because this isn’t anything new, brands like Alipus have had ensembles in the market for years, it’s actually probably how mezcal started out.

The OG, the true historic mezcal, was most likely a field blend of whatever agaves were ripe when the distiller went to work. Just imagine: You and, if you were lucky, your crew of family and friends would go out find the really ripe agaves, cut them down and then tote them back to your palenque. It was arduous work done all by hand except for the mule that might accompany you to haul those piñas back. It was highly seasonal, there’s no way you’d ever do this during the rainy season because you could never get around and those agaves wouldn’t be right. And that proverbial “field” was just as likely a forrest or hill side, a wild area where the agaves grew. 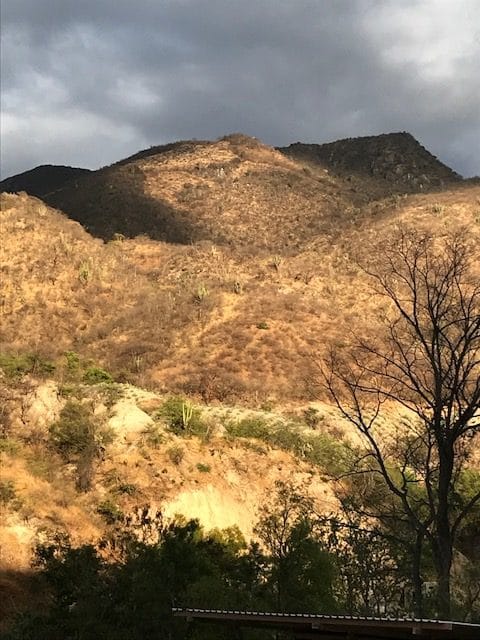 Once you had the agaves back at your distilling facility – you might even have built one close to where the agaves were growing in order to minimize the amount of work transporting them – you’d roast, crush, ferment, and distill them all together. Once you were done, that batch would be bottled up and ready for the celebrations or the itinerant sales people who would ferry them into the city for sale to the lucky few.

This isn’t strange or novel. It’s what wine makers always did – Cotes du Rhone wines have that name because those wines are about how the combination of different grapes reflect the flavor of that location. For the record, the Cotes du Rhone appellation stopped at seven red and six white varietals – that says a lot about how things used to be done. The shift towards single varietal labels in wine, hops in beer, and in spirits is new – unique products used to come from a specific place and carry that place name as their brand name. That changed along with branding to the international market where not everyone understands those place names. Words like Chardonnay were easier to brand on a global stage.

The funny thing isn’t that mezcal has followed this curve, it’s that mezcal has always been portrayed as an exception while actually reflecting what was going on everywhere else in the U.S. market. The dynamic of watching wine or beer marketing and doing that with mezcal, saying something like ‘hey wines have a local identity tied up in the geography, people, and traditions where it’s grown.’ Ron Cooper did that and added great art to advance the idea.

Brands like Koch and Jolgorio took it further by releasing incredibly diverse lines of mezcals that focused in on the unique flavors of each agave varietal and then pushed hard on the idea that this was a pure expression just like…. wine and everything else. But now people are back into blending because there’s a market for it, there’s a tradition behind it, and mezcaleros love experimenting with these mixtures.

A word on nomenclature. Most of the labels out there with blends of different agave types call them ensembles but there’s another term for a similar process, a mezcla. I dug into all of that two years ago but a quick rehash:

What’s an ensemble? In classic terminology an ensemble is a mezcal made from different agaves which are processed all together. That is, they’re roasted, crushed, fermented, and distilled as one batch.

What’s a mezcla? A mezcla, literally a “blend” or “mixture,” is when a mezcal is made by blending different agaves together at some point in the process. Some people say that you can do this with separate distillation runs, others, co-ferment different agaves, and still others have other ideas. That should give you a sense for the options and debates about this word and whole idea.

Some people don’t think these terms should even exist. They point out that, in the tradition of mezcal production, you never mixed after roasting. You did your roast and whatever came out of that was crushed, fermented, and roasted together just like the field blend concept. So, for them, the whole idea of a term like ensemble is superfluous and a term like “mezcla” just shouldn’t exist at all because the idea of mixing after the roast is anathema to tradition.

Why are they special?

It’s a tricky process. If you’re roasting one sort of agave they’re all of the same shape and, generally, mass so you can assume that they’ll roast at a similar rate. The second you start roasting different agave types that dynamic changes radically.

One of the favorite ensemble types in Oaxaca is cuishes with espadins. An espadin is probably what most people have in mind when they picture an agave, a squat green plant covered in spiny leaves. When you harvest it you get that idealized piña. But cuishes are tall and can turn bulbous on their tops so if you’re going to roast them together then you need to stack all the piñas so that none get roasted to a crisp and all are roasted all the way through. It’s a balance which is amazing to see in action. 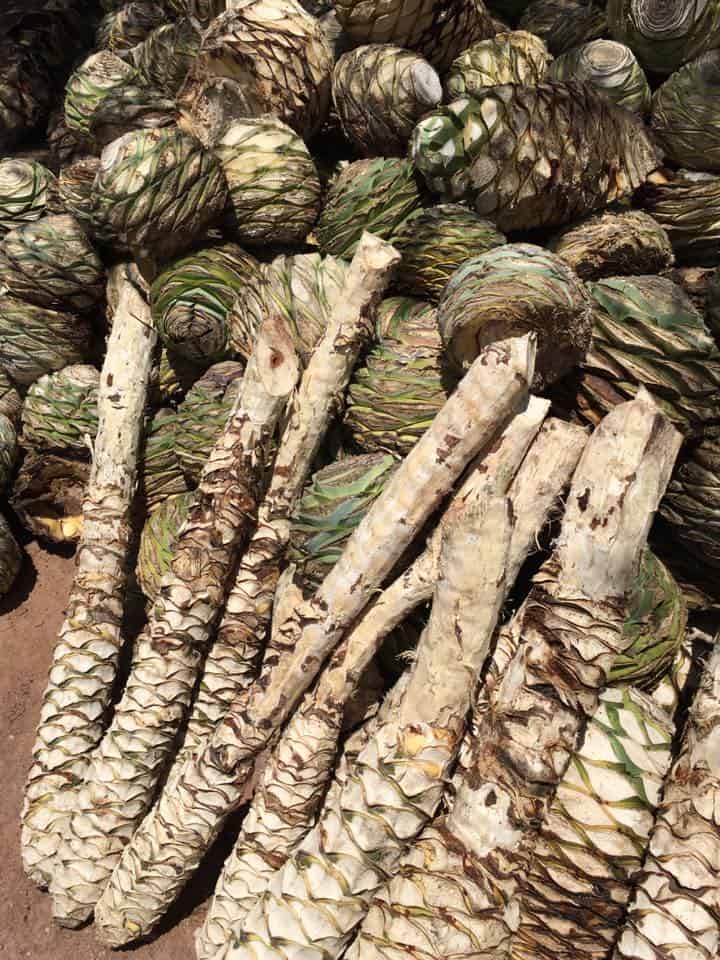 Tobala and madrecuish waiting to be roasted.

Even beyond the roast there are so many factors in getting an ensemble right and all have to do with managing differentials. One time I was I at a palenque and the mezcalero pointed out that he’d roasted everything separately so that he could layer them together in the fermentation tinas in order to distribute the flavor of the different roasts and crushes. It’s not something I would have ever thought of and still don’t know how effective it is but it gives you an idea of the lassitude if you don’t have to process everything all at once.

But most importantly, I think that these field blends are important because they bring such an amazing range of flavors to the table. Each is unique, they’re obviously hard to duplicate and many mezcaleros never try. They tell you what’s in this bottle and leave it that. You’re drinking liquid tradition and when that bottle is gone, the tradition may produce another but it will be different, an expression of a different time, place, and set of agaves. So, cherish that ensemble (or whatever we’re going to call it) and welcome it and all the others coming into the market. They’re a paradoxical return to tradition. 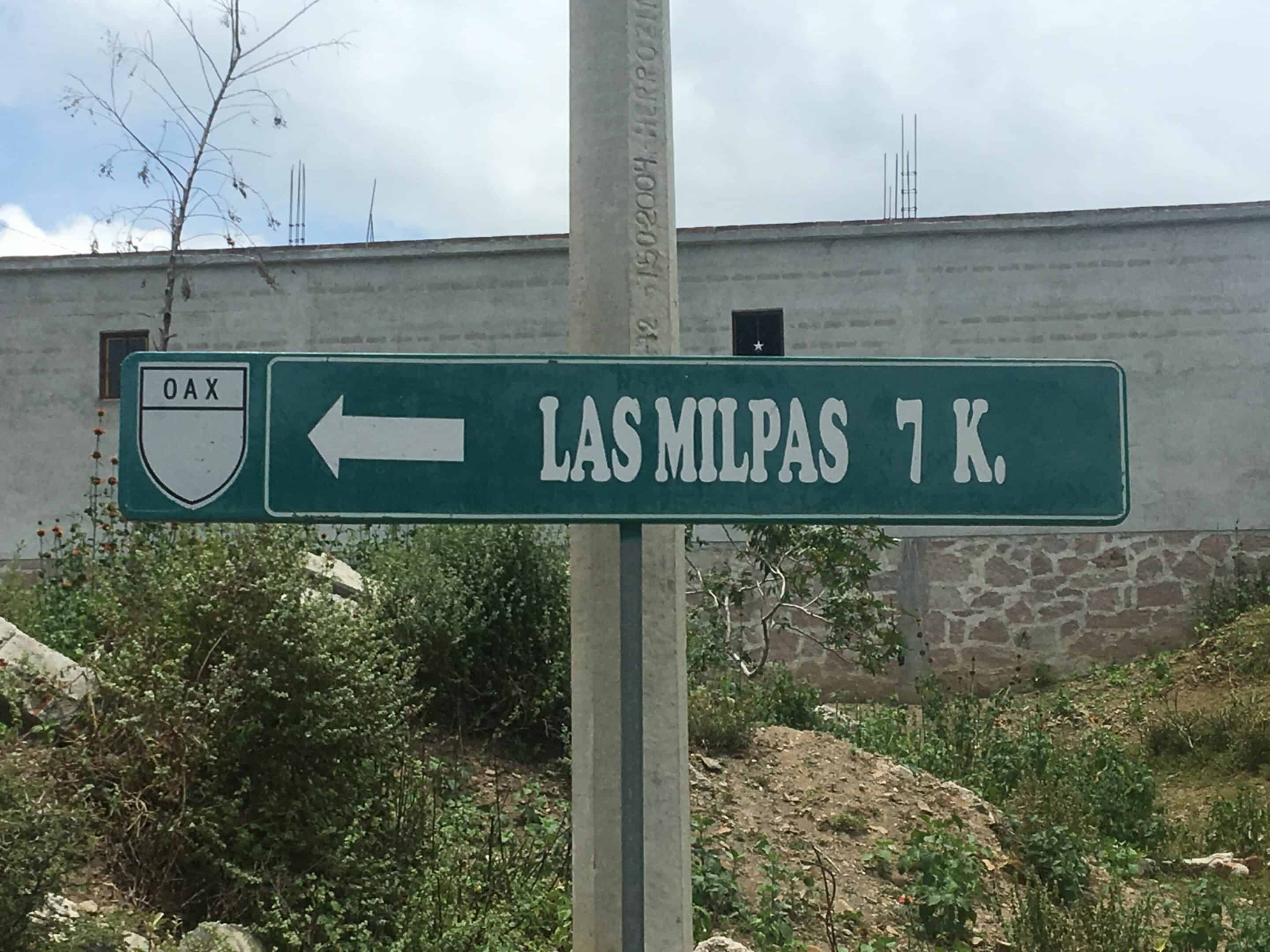 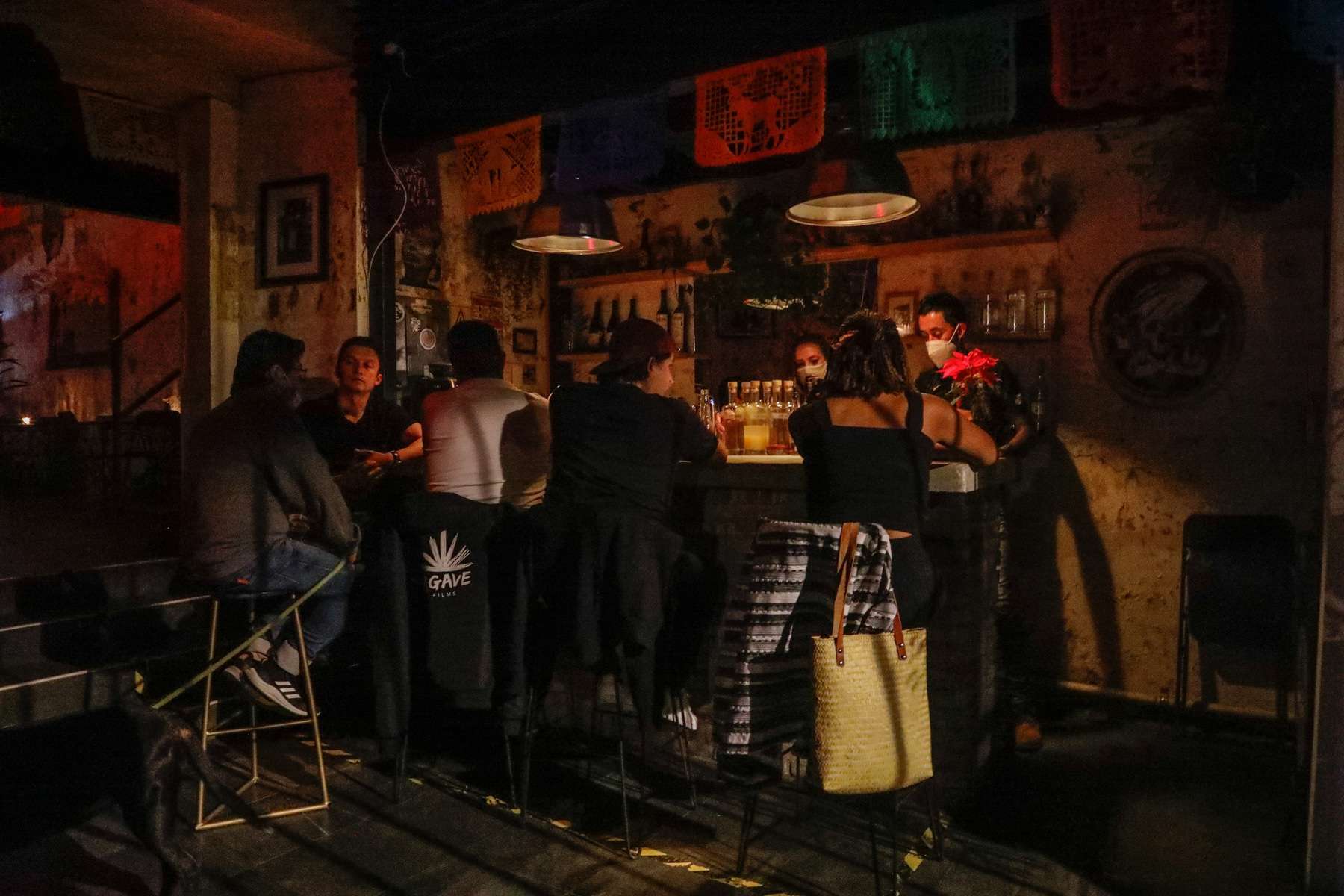 COVID-era innovations in Oaxaca’s service industry has it reimagining its post-pandemic future, now 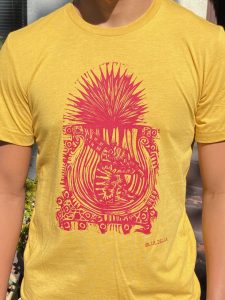